Bad to Worse for Russia 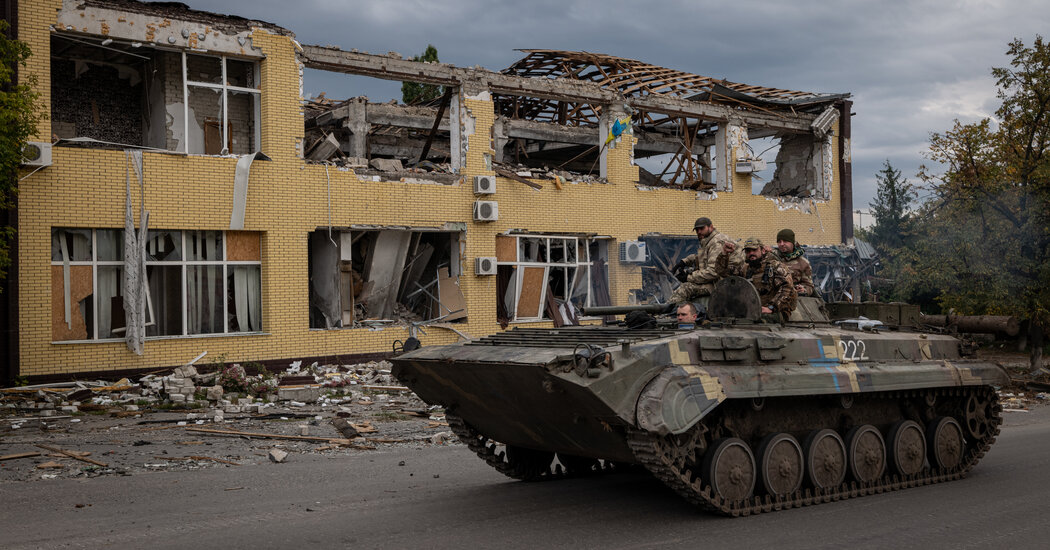 The war news has gone from bad to worse for Vladimir Putin over the past two weeks.

Russia’s recent run of problems began when Ukrainian forces recaptured parts of the country’s northeast in the most successful counterattack of the seven-month war. Since then, Russia’s struggles have grown:

These developments help explain why Putin has chosen to call up additional troops.

For months, he had resisted doing so, partly out of a concern that the move would increase public opposition to the war. Putin calibrated his past public comments to downplay the war at times, and polls suggest that many Russians are not paying much attention to it. He still has declined to institute a full military draft, although yesterday’s order was so broad that he could eventually expand it.

Western officials called the move an act of desperation and noted that Russia may need months to train and equip the troops. But Julian Barnes, who covers intelligence agencies in Washington for The Times, says that the troop mobilization does help address one of Russia’s biggest military problems. “Russia has the equipment but not the manpower,” Julian said. “Ukraine has the manpower but not the equipment.”

Julian added: “The potential countermove for the West is going to be to send more artillery tubes and tanks to Ukraine.”

The U.S., the E.U. and other allies have already sent billions of dollars worth of weapons to Ukraine. Those weapons, especially shoulder-fired and longer-range missiles, have been enormously helpful. President Biden, speaking at the United Nations yesterday, trumpeted this assistance while also warning Putin not to use nuclear weapons.

Still, Ukraine’s leaders say they need additional equipment to force Russian troops out of the country. The Biden administration has requested more funding for Ukraine from Congress.

One question is whether the U.S. would be willing to send longer-range missiles and more modern tanks to Ukraine than allies have previously sent. So far, the West has chosen not to, partly out of a desire to avoid making Putin believe that an invasion of Russia was plausible. In that scenario, Putin might choose to escalate his attacks. Without more tanks, however, Ukraine would likely be at a military disadvantage.

Amid all of Russia’s problems, has anything been going well for Putin lately?

“Militarily, not much has gone right since the summer, when Russia took control of most of the Donbas, in eastern Ukraine,” Julian said. “That said, Russia’s economy is doing better than expected. The sanctions have not totally ground things to a halt. High energy prices mean they can keep the economy going and discontent down. But will the partial mobilization unleash that unrest?”

More on the war

Trump’s big lie about the 2020 election survives because many Republican elected officials treat politics as a joke, Carlos Lozada argues in his debut column.

“It’s corn!” He went viral for his love of corn. Now it’s back to elementary school.

Clumsy warnings: Attempting to discourage bad behavior can backfire. Which leads us to … the NyQuil chicken.

Tiny love stories: “When I hate my husband.”

Advice from Wirecutter: The best hair ties, Scrunchies and clips.

Lives Lived: As a top editor at The Times for decades, Allan Siegal served as the paper’s collective conscience and its arbiter of language, taste, tone and ethics. He died at 82.

SPORTS NEWS FROM THE ATHLETIC

All eyes on Aaron Judge: The slugger hit two doubles in a blowout win last night, much to the dismay of the Yankee Stadium crowd, leaving him at 60 home runs on the season with 14 games to go. Judge has another chance to tie Roger Maris’s record tonight against Boston.

A weird Presidents Cup: No LIV golfers are allowed to compete in the Presidents Cup this year, decimating the International Team. The first group tees off today at 1 p.m. Eastern.

Sarver to sell franchises: A week of furor culminated yesterday with Robert Sarver’s announcement that he would sell the Phoenix Suns and Mercury. The estimated price tag: $3 billion.

“Goodnight Moon” has been a bedtime staple for 75 years, passed from one generation of parents to the next.

Elisabeth Egan writes in The Times that she was put off by the book at first. Isn’t it sad that the bunny says good night to nobody? And who is that quiet old lady? One night, though, she discovered its true power when it cast a calming spell over her wild toddler.

“Maybe this is why we give ‘Goodnight Moon’ to new parents — why we inscribe its cheerful yellow endpapers with encouraging notes, why I know all 131 words by heart, a decade after I stopped reading it at bedtime,” Egan writes. “It’s a blueprint for peace in a time of chaos.”

Is the Hyperloop Doomed?

Cuba slowly starts restoring power after the entire island was blacked out.

Our Correspondents on the Biggest Music, Shows and Books in Their Parts of the World

As Russians Flee, Some Find Draft Notices Waiting at the…