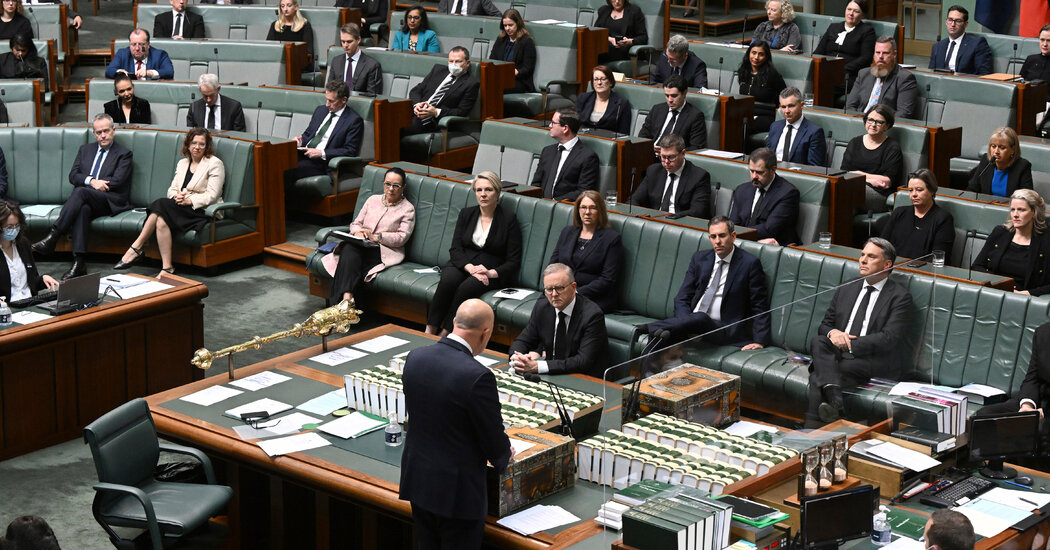 SYDNEY, Australia — Australia’s Labor government introduced legislation Wednesday that would create a federal integrity commission with broad powers to investigate allegations of misconduct by members of Parliament and all government officials. But much of its work would take place out of public view, reflecting a struggle to balance independent accountability with Australia’s well-worn cocoon of procedural secrecy.

Mark Dreyfus, the attorney general, said that the new oversight agency — which is expected to be approved by lawmakers — represents the most ambitious effort in decades to enforce high ethical standards and to restore the public’s faith in the Australian government.

“The National Anti-Corruption Commission aims to eliminate corruption in the federal public sphere, and restore trust and transparency in our democratic institutions,” he said, speaking in Parliament, in Canberra, on Wednesday. “The commission will be able to investigate seriously systemically corrupt conduct, protecting any part of the federal public sector.”

And with an initial budget of 262 million Australian dollars ($167 million), he added, it could begin inquiries on its own or in response to tips from anyone, including anonymous whistle-blowers.

The bill to create the commission fulfills a campaign promise by Prime Minister Anthony Albanese, and its budget and broad mandate — which includes federal government employees and contractors — was generally welcomed by the public and by lawmakers from across the political spectrum, but not without a few razor-sharp caveats.

Its creation would be long overdue — for years, polls have shown strong support for a federal integrity commission. And even as they welcomed more oversight of Australia’s moneyed-up and insular politics, independent critics in Parliament, along with many lawyers and former judges, argued that in its current form, the commission would still do too much to protect politicians because of a provision requiring vaguely defined “exceptional circumstances” to make hearings public.

“Sunlight is the best disinfectant, and many corruption investigations would not be successful without public hearings,” said Anthony Whealy, a lawyer and chairman of the Center for Public Integrity. “In legal terms, ‘exceptional circumstances’ has no real meaning, and it will act as a brake on the public interest.”

Secrecy and so-called soft corruption, long a problem in Australian political life, lately has become even more common and corrosive. Dark money floods campaigns. Public records requests are rejected at increasing rates. In May’s election, the previous government was thrown out of office after a series of scandals involving public money being directed to contested districts for unneeded projects, including parking lots and sports facilities.

The public is also still reeling from the recent bizarre revelation that former Prime Minister Scott Morrison, who led that government, covertly put himself in charge of five ministries during the pandemic.

Yet when Mr. Dreyfus introduced the integrity commission bill on Wednesday, he confirmed that “the default position is that hearings will be held in private.”

Section 73 of the bill says the commission “must” hold its hearings in private unless the commissioner decides there are “exceptional circumstances,” and it is in the public interest to make one or more of the hearings open.

That standard sets a high bar for public disclosure, legal scholars say, beyond what is required by most state anti-corruption bodies with similar mandates.

The privacy default also reflects what the Morrison government had said it wanted in any anti-corruption body: protection against people’s careers being ruined by unproven allegations.

“I don’t want a situation where somebody has their reputation trashed, and after a couple of years, don’t even know whether or not the investigation is standing,” he said.

He added that he supported the government’s proposal “in the model they put forward.”

To some, that sounded like a deal had been struck. Australia’s major parties — accustomed to a system where campaign donations are often hidden, and off-the-record galas with lobbyists and journalists in Parliament are the norm — have resisted creating an anti-corruption commission ever since the idea was introduced in Parliament by a Greens party leader in 2009. Their share of the vote in each election has also been declining.

“I would hate to think the two major parties have got together to protect themselves with once-in-a-generation legislation, which in part is designed to restore public trust,” said Zoe Daniel, one of several newly elected independent members of Parliament who had campaigned explicitly for a transparent integrity commission with teeth.

The Center for Public Integrity quickly noted, in an email sent to reporters, that allowing more public hearings did not mean every hearing would be put on display. In New South Wales, the state anti-corruption body held 979 private examinations and 42 public inquiries from 2013 to 2020. The center added that in Victoria, the only state that has the “exceptional circumstances” test for its integrity commission, there have been far fewer inquiries into corruption than in New South Wales.

Ms. Daniel said she worried that defense lawyers “will jump on ‘exceptional circumstances’” to make it harder for inquiries to get started, to keep the public in the dark, and to delay or deny accountability.

“Given how difficult it has been politically to get to the point of having this legislation, it seems to be a wasted opportunity to water it down in any way,” she said. “I appreciate that it has to be done carefully and sensibly, and reputation protection should be a part of it, but you don’t want to undermine the legislation itself or put a brake on corrupt investigations.”

The bill will now go through a process of review — and hopefully, said Ms. Daniel, a former journalist, it will emerge with improvements in public disclosure.

“We have to get this right,” she said, adding: “There is a lot of work yet to be done.”

After the Quake: Photos From Turkey and Syria

How strong is a magnitude-7.8 quake?

Monday’s earthquake was as powerful as the strongest…

‘Baraye,’ the Anthem of Iran’s Protest Movement, Wins a…

Your Monday Briefing: The U.S. Shoots Down China’s Balloon