Trump Claims He Declassified Documents. Why Don’t His Lawyers Say So in Court? 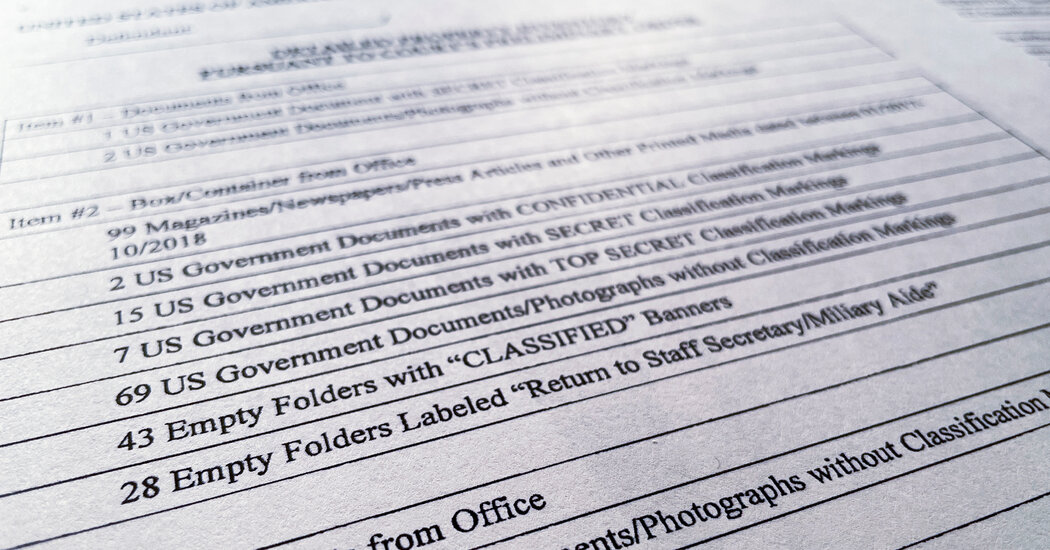 WASHINGTON — Former President Donald J. Trump claimed on Wednesday that when he was in the White House, his powers were so broad he could declassify virtually any document by simply “thinking about it.”

That argument — which came as he defended his decision to retain government documents in his Florida home in an interview with the Fox host Sean Hannity — underscored a widening gap between the former president and his lawyers. By contrast, they have so far been unwilling to repeat Mr. Trump’s declassification claim in court, as they counter a federal investigation into his handling of government documents.

Over the past week, a federal appeals court in Atlanta — along with Mr. Trump’s choice for a special master to review the documents seized last month — undermined a bulwark of his effort to justify his actions: Both suggested that there was no evidence to support the assertion that Mr. Trump had declassified everything — in writing, verbally or wordlessly — despite what the former president may have said on TV.

On Thursday, the special master, Judge Raymond J. Dearie, also appeared to take aim at another one of Mr. Trump’s excuses — that federal agents had planted some of the records when they searched his Mar-a-Lago estate. In an order issued after the appellate court had ruled, Judge Dearie instructed Mr. Trump’s lawyers to let him know if there were any discrepancies between the documents that were kept at Mar-a-Lago and those that the F.B.I. said it had hauled away.

By the time the Hannity interview aired late Wednesday, a three-judge appellate panel of the Court of Appeals for the 11th Circuit — which included two jurists appointed by Mr. Trump — had blocked part of a lower court order favorable to the former president. The panel brushed aside the suggestion that he had declassified 100 highly sensitive documents found in his residential and storage areas as both unfounded and irrelevant.

The appellate panel went on to declare that the declassification issue, which Mr. Trump has repeatedly thrust at the center of the case, was “a red herring” that would not have factored into its ruling even if it had been extensively argued before them. Even if Mr. Trump had, in fact declassified the records, the judges wrote, he was still bound by federal law, including the Presidential Records Act, that required him to return all government documents, classified or unclassified, when he left office.

Declassifying an official document would not alone “render it personal” or turn it into a possession he could hold onto after leaving office, the court said.

The judges in Atlanta were not alone in their opinion.

One day earlier, Judge Dearie expressed a similar form of skepticism. He pointedly told Mr. Trump’s legal team that since the classified documents were clearly marked classified, he intended to consider them as classified — unless they offered evidence to the contrary.

Wednesday’s ruling was a major victory for the Justice Department, which argued that the earlier decision by Judge Aileen M. Cannon, whom Mr. Trump appointed to the Federal District Court for the Southern District of Florida, had hamstrung its investigation and hampered the intelligence community’s ability to conduct a separate intelligence assessment.

On Thursday, Judge Cannon modified her order for the special master review to exclude documents marked as classified, in line with the appeals court decision.

Nonetheless, the order seemed to raise new questions. Judge Cannon did not issue a written opinion explaining why she had taken that step before Mr. Trump indicated whether he would appeal to the Supreme Court. By pre-emptively removing the portions of the order that the appeals court had blocked, she may have rendered any further litigation over the matter moot. Mr. Trump’s lawyers did not respond to requests for comment.

More on the Trump Documents Inquiry

Shortly after Judge Cannon’s order was issued, Judge Dearie released his own scheduling order for the review that will now be focused only on the roughly 11,000 documents that are not marked as classified.

Under his plan, the two sides would identify any disputes over whether the records are government or personal property, or privileged or unprivileged, by Oct. 21.

After Judge Cannon rules on the disputed files, Judge Dearie said, he will entertain a motion, should Mr. Trump wish to file one, to get back the seized items. Judge Dearie also said he would not seek any compensation since he is still actively hearing cases, but would hire a retired magistrate judge from the Eastern District of New York, James Orenstein, to assist him at a rate of $500 per hour.

Mr. Trump will still have to foot the bill, as specified in a previous ruling by Judge Cannon.

It remains possible that Mr. Trump’s lawyers will appeal the matter to the Supreme Court, hoping to get the court’s conservative majority to frame a broad new definition of presidential authority that the government says is at variance with judicial precedent and norms. But the lawyers might also pursue a narrower strategy, seeking to delay the inquiry in hopes of shielding Mr. Trump from legal liability, rather than trying to leave a more durable constitutional imprint.

During the hearing before Judge Dearie, Mr. Trump’s lawyers provided a glimpse of what the declassification gambit may actually be about. It appears to be a strategy that the former president’s legal team is holding in reserve should he ultimately challenge the legality of the Mar-a-Lago search in a suppression motion or file court papers — known as a Rule 41 motion — to get some of the seized materials back from the Justice Department.

James Trusty, one of Mr. Trump’s lawyers, gave a hint about what he and his partners have been planning, telling Judge Dearie that they might offer evidence at some point that Mr. Trump declassified the documents. But to do so, Mr. Trusty said, the legal team needed to see the classified material first.

While Judge Dearie welcomed the idea that Mr. Trump’s lawyers might one day prove their claims, he seemed less pleased to hear them making arguments but not providing evidence.

The idea of a magic-wand process by which a president can both exercise power and absolve himself of legal liability holds deep appeal to Mr. Trump, according to people close to him. And while many legal experts have dismissed such a broad definition of presidential power, several of the former president’s key allies — including the former White House aide Kash Patel; the journalist John Solomon; and Tom Fitton, who runs Judicial Watch, a conservative legal group — have urged him to adopt that defense.

Mr. Trump’s legal team has merely hinted at the possibility that he declassified the documents, without taking a firm position in court, where making a false statement can have professional consequences.

In a letter to the Justice Department in May, Mr. Trump’s legal team first put forward a coy insinuation that Mr. Trump might have declassified everything — while stopping short of actually saying he did so. At the time, Mr. Trump had just received a grand jury subpoena for any sensitive records that remained at Mar-a-Lago, and the letter argued that Mr. Trump could not be charged under a law that criminalizes mishandling classified information.

Even then, there were indications that the classification debate, while foremost in the former president’s mind, was of limited use for his lawyers.

No credible evidence has emerged to support Mr. Trump’s claims, but even if they turned out to be true, legal experts say that would not get him out of legal trouble.

When the Justice Department later obtained a search warrant for Mar-a-Lago, it listed as the basis of the investigation three other laws for which prosecutors do not need to prove that a document was classified as an element of the offense. They include the Espionage Act and obstruction.

Mr. Trump has continued to insist in public that he had declassified everything the government seized from his residence.

Yet if the former president is serious about using that claim as the cornerstone of his defense, he will ultimately have to take the risk of backing up those assertions in court — under oath.

Mr. Trump’s lawyers could also submit sworn declarations, though it is unclear if they would be willing to do so; federal investigators are currently examining whether members of his legal team falsely attested that they had returned sensitive materials to the government before the search warrant uncovered dozens of documents.

Here’s how to stay safe when the power goes out.

How an Underground Skate Park in Los Angeles Became Legal