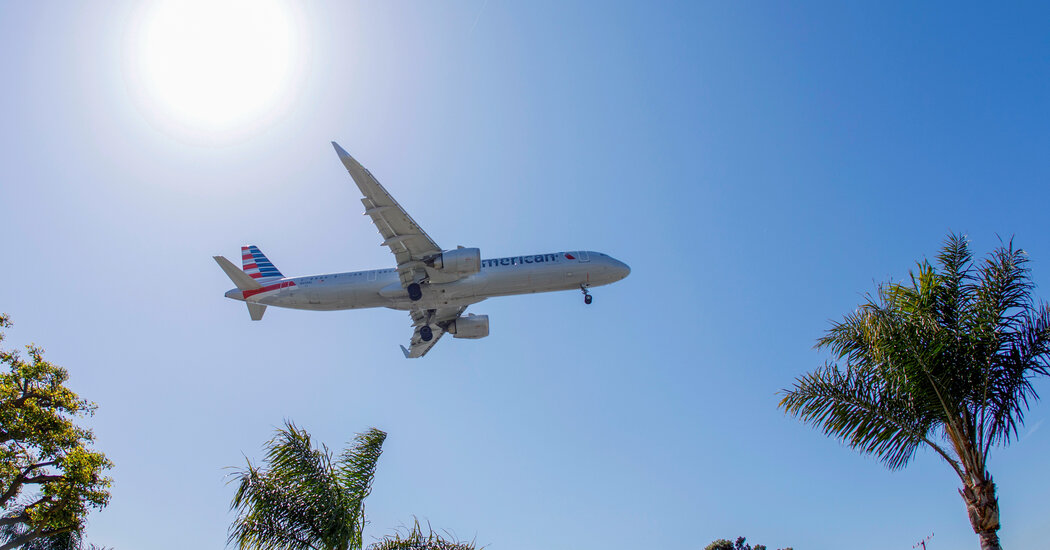 A California man who was captured on video punching an American Airlines flight attendant during a flight from Mexico to Los Angeles was arrested this week, the Justice Department said, the latest instance of unruly behavior in the skies as coronavirus restrictions loosen and travel picks up.

The man, Alexander Tung Cuu Le, 33, of Westminster, Calif., was charged on Thursday with one count of interference with flight crew members, a day after he ran up to a flight attendant and punched him in the back of the head, the Justice Department said in a news release. Mr. Le could face up to 20 years in prison if convicted.

Jelani Lindsey, a lawyer at the Office of the Federal Public Defender who is representing Mr. Le, did not immediately respond to a call seeking comment on Thursday.

The Association of Professional Flight Attendants, a union that represents about 24,000 flight attendants at American Airlines, said in a statement that “this violent behavior puts the safety of all passengers and crew in jeopardy and must stop.”

The charges against Mr. Le came as air travelers and crews continued to face an unusually high number of disruptions since the onset of the pandemic. In 2019, 146 investigations into unruliness on planes were initiated. So far in 2022, there have been 680 such investigations, according to data from the Federal Aviation Administration.

Last year, much of the aggressive passenger behavior was tied to mask enforcement. The F.A.A. tallied nearly 6,000 reports of unruly passengers last year, and about 4,300 of them were mask-related, according to the F.A.A.

The pace appears to have decelerated this year, though it remains above prepandemic levels. As of Tuesday, there have been nearly 2,000 reports. The Transportation Security Administration said earlier this year that it would stop enforcing a mask mandate on planes after a federal judge in Florida struck down the requirement.

The episode on Flight 377 began about 20 minutes after takeoff on Wednesday when Mr. Le got up from his seat as flight attendants provided food and beverage service, according to an affidavit from the Federal Bureau of Investigation.

Mr. Le then walked to the front of the plane, loitered near the first-class cabin and sat in an unoccupied row, the affidavit states.

A different flight attendant, identified in the affidavit as S.B.G., approached Mr. Le and asked him to return to his seat. But Mr. Le stood up and closed both of his fists as he assumed a “fighting stance,” the affidavit states. When S.B.G. went to the front of the plane to report the behavior to the pilot, Mr. Le rushed toward him and punched him in the back of the head, the affidavit states.

Video from a passenger shows people screaming as they see a man, wearing an orange shirt with a floral pattern, strike a flight attendant.

“Oh my god,” one passenger yells.

After he hit S.B.G., Mr. Le shuffled toward the back of the plane, according to the affidavit. Then, the affidavit states, “several passengers apprehended Le near an exit row.”

Mr. Le was later moved to a different row, and his hands and legs were cuffed, the Justice Department said. Flight attendants had to restrain him to his seat with seatbelt extenders because he kept unbuckling his seatbelt, the affidavit states.

Curtis Blessing, a spokesman for American Airlines, said in a statement that Mr. Le had been met by law enforcement officers upon arrival in Los Angeles.

“The individual involved in this incident,” he added, “will never be allowed to travel with us in the future.”

Migrants claiming they ‘just want to get to NY’ broke into elderly Texas farmer’s house: grandson

Here’s how to stay safe when the power goes out.

How an Underground Skate Park in Los Angeles Became Legal