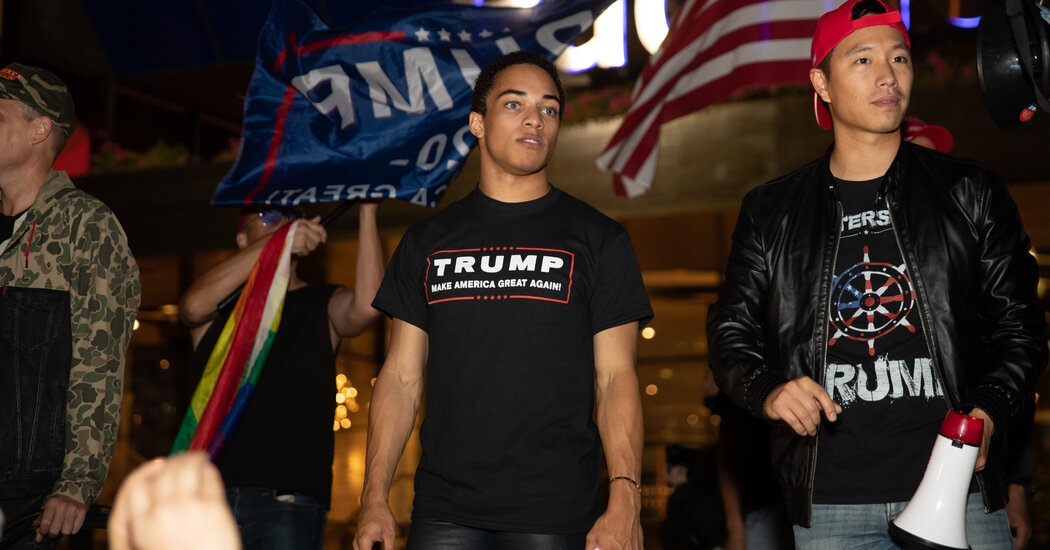 Soon after Herschel Walker, the former football star, announced he would run for U.S. Senate in Georgia as a Republican, his son Christian appeared with him at an event at Mar-a-Lago, and grinned when his father greeted him with a kiss on the head. “Had the honor of introducing my dad,” he tweeted, “then got to hug a future senator. Perfect night.”

The moment seemed a logical convergence of Christian Walker’s personal and public lives: the young man was already emerging as a conservative social media star who took delight in provoking the left, and defending Donald Trump’s MAGA movement.

Yet, after that night, he fell largely silent about his father’s campaign. That changed in spectacular fashion Monday night after news broke that in 2009, Herschel Walker, a staunch opponent of abortion rights, paid for his then-girlfriend to have an abortion, according to a report from the Daily Beast.

“You’re not a ‘family man’ when you left us to bang a bunch of women, threatened to kill us, and had us move over 6 times in 6 months running from your violence,” Christian Walker wrote of his father on Twitter.

Feuding among family can be a source of embarrassment for any political campaign. But what unfolded in Georgia this week was extraordinary for the level of indignation so forcefully and publicly aimed at a candidate by his child at such a crucial campaign moment.

Now, Christian Walker, 23, is at the center of a drama that could upend one of the most competitive races in the country.

The elder Mr. Walker called the abortion report a “flat-out lie,” while conservative news media and Republicans, eager to regain control of the narrowly split Senate, rallied to his side. The Walker campaign did not respond to a request for comment for this article.

The spectacle has also put a fresh spotlight on how Christian Walker arrived at his political views, some, he now says, directly connected to his father and his own tumultuous family life.

Christian Walker, though, has been his own right-wing warrior for several years. He built a large social media presence, and revels in his seeming contradictions. He is a young Black man who called the George Floyd protests “terrorist attacks.” He is attracted to men but does not identify as “gay,” while calling L.G.B.T.Q. activists a “rainbow cult” and mocking Pride Month. He delights in antagonizing the left through short video rants on social media, often while holding an iced coffee and wearing an impish grin.

His following on TikTok, Twitter and Instagram has made him well-known among members of Gen Z — many of whom are now just hearing about his father’s heyday as a Heisman Trophy-winning football star at the University of Georgia.

In several statements (some deleted) and videos posted on Twitter on Monday and Tuesday, the younger Mr. Walker tore into his father, displaying an angry, wounded vulnerability that points to a complicated relationship with his celebrity father.

“My favorite issue to talk about is father absence. Surprise! Because it affected me,” he said in a video posted to Twitter this week.

“He has four kids, four different women, wasn’t in the house raising one of them,” he said of his father in one of two videos he posted to Twitter. “He was out having sex with other women. Do you care about family values?”

Christian Walker has leveled some of his criticism at conservative activists and pundits who he said are “questioning my authenticity” while trying to pressure him into publicly supporting his father’s candidacy.

He said he decided to speak out after his father denied the abortion story.

“I haven’t told one story about what I experienced with him,” he said in one video. “I’m just simply saying don’t lie.”

Despite the personal nature of his latest posts about his father, they echoed similar themes from many of his political diatribes, videos that often include tirades against men, like Herschel Walker, who have fathered children out of wedlock, or men and women who have affairs.

“You’re not a victim when you sleep with a married man,” Christian Walker titled a recent episode of his podcast, “Uncancellable.” He has criticized an Instagram model for her alleged affair with the singer Adam Levine, who he noted “had a pregnant wife with children at home.”

At times, he has publicly embraced his father’s legacy, initially promoting his candidacy. At other times he’s asserted his independence, writing in 2015, when he was a teenager, “um people need to understand that I’m CHRISTIAN WALKER not Herschel walkers son.”

Christian Walker did not respond to a request for comment.

Mr. Walker, who grew up in Dallas, is the only child of Herschel Walker and his ex-wife, Cindy Grossman. Ms. Grossman filed for divorce in 2001, two years after their son was born.

Herschel Walker dedicated his 2008 memoir to his son, writing: “To my son, Christian Walker, I love you. Thank you for helping me to mature as a man and a father.”

After his son’s Twitter posts this week, Herschel Walker tweeted, “I LOVE my son no matter what.”

Heath Garrett, a strategist whose firm does work with a Herschel Walker-aligned PAC, said Wednesday that he thinks “it is possible that Georgia voters are capable of having sympathy for both Herschel and Christian in this saga.”

Christian Walker’s comments this week prompted a backlash from some conservatives, but also an outpouring of support on social media. Many, including some self-described liberals, said they disagreed with his politics but were moved by his family struggle. Others shared stories of their own absentee parents or childhood trauma.

In Dallas, Christian Walker became a star athlete making waves in the competitive cheer scene in Texas. He won a world championship as a member of Spirit of Texas, a premier cheer team, according to social media reports and press interviews.

In past interviews, Herschel Walker has said that after getting over the surprise about his son’s sport of choice, he was supportive. “I was proud that he was doing it,” he told C.B.S. News in 2015.

Christian Walker continued his cheer career when he enrolled at Southern Methodist University in 2017. But in 2020, when he moved to the West Coast and transferred to the University of California, Los Angeles, his priorities seemed to change.

Posts on Christian’s Instagram account dated before June 2020 mostly consist of cheerleading photos, scenic Los Angeles, and typical influencer shots of him posing in designer clothing brands such as Gucci and Givenchy.

But his posts made after the murder of George Floyd have an explicitly political slant. He called the Black Lives Matter protest movement the “KKK in blackface.” Along the way he amassed hundreds of thousands of followers across social media platforms.

In online classes at U.C.L.A., however, Mr. Walker did not display the same level of combativeness, fellow classmates said.

Jessica Epps, who took several classes with him during her time at U.C.L.A., remembered being surprised about how understated he was. During one class that took place amid the Black Lives Matter protests of 2020, the professor asked students to discuss the movement, and Ms. Epps remembered Mr. Walker speaking up and being somewhat critical. Still, he was measured in his response, she said.

“His demeanor definitely seemed a lot more calm and reserved in the classroom setting,” she said. He seldom spoke during lectures, and mostly “kept to himself,” she said.

“Public schools and colleges have turned into Leftists’ indoctrination centers,” he told the publication. “There’s no ‘tolerance’ for any perspective other than the one that the professor is pumping into you.”

At U.C.L.A., Christian Walker became known for tirades filmed in his car at a Starbucks drive-through, and conflicts with students and administrators.

In livestreams and direct messages on social media, he feuded with fellow students and other people who assailed his political beliefs and, specifically, his use of an offensive term for mentally disabled people.

The incident that seemed to spark the most acrimony occurred earlier this year, when he tweeted screenshots of comments made by students in a Chinese language class he had taken the year before, which showed them expressing their anger at his being in the class with them.

“How dare you @ucla. I’ve paid 100s of thousands for this degree. I show up to class to study like everyone else. And you allow your students to treat me like crap because of my political beliefs? Wow. Disgusting,” Christian tweeted.

Some U.C.L.A. students were fascinated by his persona.

“He’s very loud, very flamboyant, he’s very attention-grabbing if you’re scrolling and find one of his videos — he’s immediately yelling,” said Joseph Keane, a recent U.C.L.A. graduate who said he and his roommate would watch Christian Walker’s videos to amuse themselves. “We would laugh — it’s intentionally over the top.”

Mr. Keane said Christian Walker was well-known on campus as a conservative firebrand, though he and his friends did not take him seriously.

In June, Christian Walker graduated from U.C.L.A. with a bachelor’s degree, according to the school. Shortly after, he announced he was moving to a place where more people shared his political beliefs: Florida.

Do You Work in the Auto Industry? We Want to Hear From You.

3 Races for Governor to Watch This Year

In Austin, Recovery From Winter Storm Is Slow and Piecemeal

Off-Duty Officer Shot While Trying to Purchase Vehicle in…