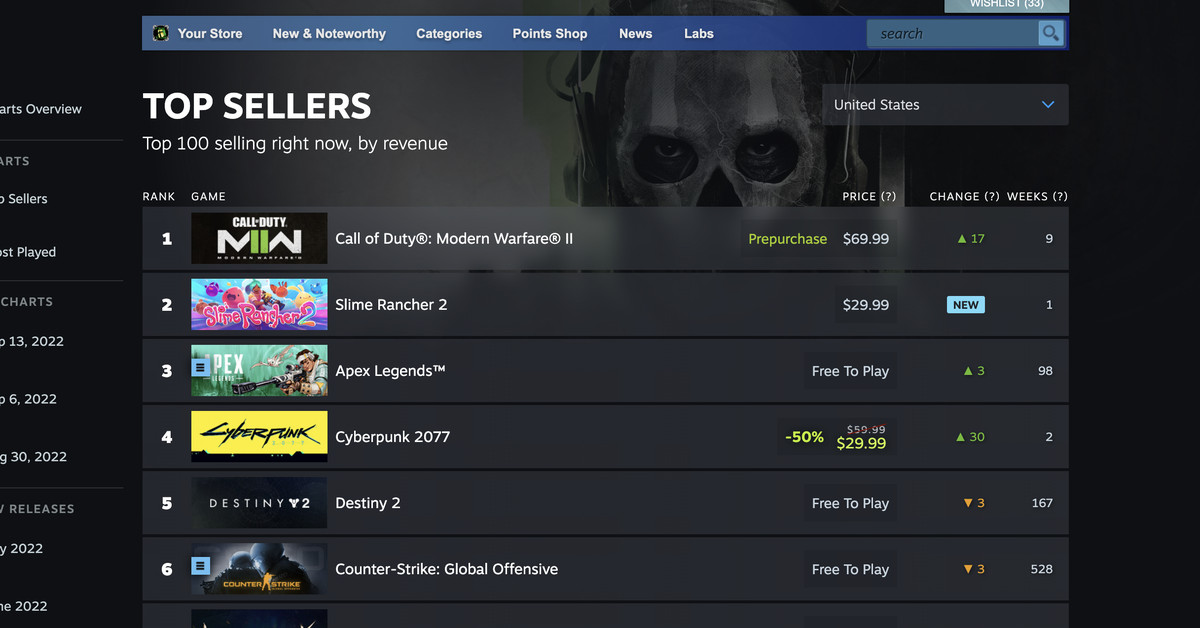 Valve’s stats page for its Steam storefront now has real-time charts showing both the top-selling and most played games at any given moment. You can look at the new stats page right here.

As I write this, the top-selling title is Call of Duty: Modern Warfare II — which perhaps isn’t too shocking given that preordering the game gets you early access to the open beta — but the next best-selling game is, to my surprise, Slime Rancher 2.

According to a blog post from Valve, the top-selling lists are ranked based on total revenue, including DLC and in-game purchases, which is intended to provide a “more complete picture of which games players are excited about getting into and continuing to play.” And Valve has added metrics like number of weeks on the chart and weekly change in rank to give you a more granular idea of how games might be trending.

these updated Steam charts are so much neater, especially on mobile https://t.co/ootcSrpl1z pic.twitter.com/IUToFk4DUy

The most-played games list is topped by some perennially popular free-to-play games like CS:GO, Dota 2, and Apex Legends, but this chart also shows that Cyberpunk 2077 is in the top 10, likely buoyed by a new update and the Netflix anime. You can sort the most played list by current players, which will show you what’s being played the most right at that moment, and daily players, which ranks games based on peak daily players.

This new stats page is already a robust source of information, and I think it will be an interesting one to keep an eye on, especially as we enter the holiday buying season. I also think I’ll also be using it to discover games that a lot of people are paying attention to — like Slime Rancher 2, apparently.