Republicans Intensify Attacks on Crime as Democrats Push Back 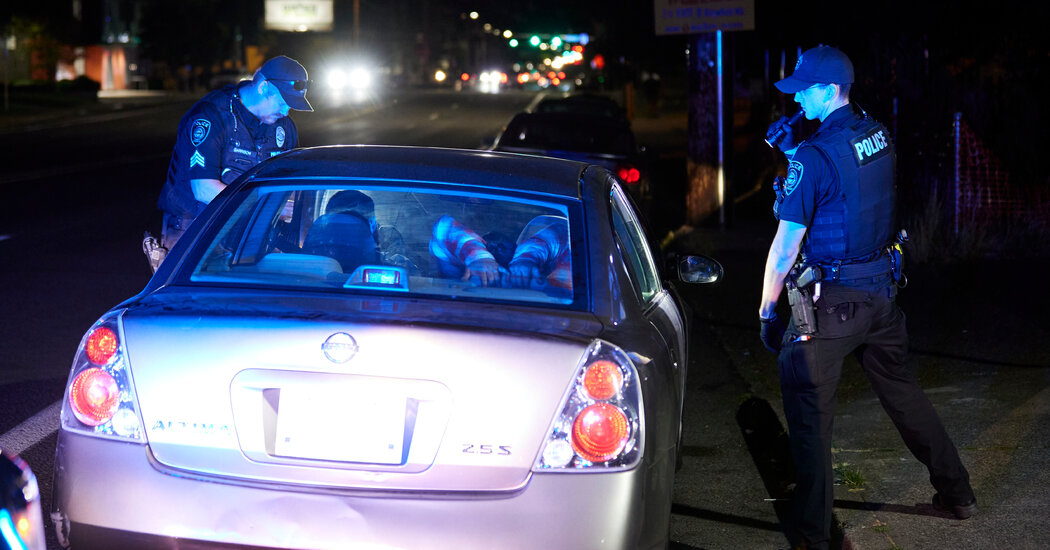 In Pennsylvania, Republicans are attacking John Fetterman, the Democratic Senate candidate, as “dangerously liberal on crime.”

Outside Portland, Ore., where years of clashes between left-wing protesters and the police have captured national attention, a Republican campaign ad juxtaposes video of Jamie McLeod-Skinner, a Democratic congressional candidate, protesting with footage of rioters and looters. Ms. McLeod-Skinner, an ominous-sounding narrator warns, is “one of them.”

And in New Mexico, the wife of Mark Ronchetti, the Republican nominee for governor, tells in a campaign ad of how she had once hid in a closet with her two young daughters and her gun pointed at the door because she feared an intruder was breaking in. Though the incident happened a decade ago, the ad accuses Gov. Michelle Lujan Grisham, Mr. Ronchetti’s Democratic opponent, of making it “easier to be a criminal than a cop.”

In the final phase of the midterm campaign, Republicans are intensifying their focus on crime and public safety, hoping to shift the debate onto political terrain that many of the party’s strategists and candidates view as favorable. The strategy seeks to capitalize on some voters’ fears about safety — after a pandemic-fueled crime surge that in some cities has yet to fully recede. But it has swiftly drawn criticism as a return to sometimes deceptive or racially divisive messaging.

Crime-heavy campaigns have been part of the Republican brand for decades, gaining new steam in 2020 when President Donald J. Trump tried to leverage a backlash to the Black Lives Matter movement to vilify Democrats. But two years later, left-wing calls to defund the police have given way to an effort to pump money back into departments in many Democratic-led cities, raising questions about whether Republicans’ tactics will be as effective as they were in 2020, when the party made gains in the House.

Republicans are running the ads most aggressively in the suburbs of cities where worries about public safety are omnipresent, places that were upended by the 2020 protests over racial injustice or are near the country’s southwestern border. In some of the country’s most competitive Senate races — in Ohio, Pennsylvania and Wisconsin — Republican candidates have pivoted to a message heavily aimed at crime.

“This is something that crosses party lines and everyone says, ‘Wait a minute, why isn’t this something that is dealt with?’” said Mr. Ronchetti, whose state has experienced an increase in violent crime this year. “You look at New Mexico: People used to always know someone with a crime story. Now, everyone has their own.”

National Republican strategists say they always planned to use crime as a so-called kitchen-table issue, along with inflation and the economy. Now, after a summer when Democrats gained traction in races across the country, in part because of the upending of abortion rights, Republican campaigns are blanketing television and computer screens with violent imagery.

Some of the advertising contains thinly disguised appeals to racist fears, like grainy footage of Black Lives Matter protesters, that sharply contrast with Republican efforts at the beginning of Mr. Trump’s term to highlight the party’s work on criminal justice overhauls, sentencing reductions and the pardoning of some petty crimes.

The full picture on crime rates is nuanced. Homicides soared in 2020 and 2021 before decreasing slightly this year. An analysis of crime trends in the first half of 2022 by the Council on Criminal Justice, a nonpartisan policy and research group, found that murders and gun assaults in major American cities fell slightly during the first half of 2022, but remained nearly 40 percent higher than before the pandemic. Robberies and some property offenses posted double-digit increases.

Candidates on the right have tended to be vague on specific policy details: A new agenda released by House Republicans proposes offering recruiting bonuses to hire 200,000 more police officers, cracking down on district attorneys who “refuse to prosecute crimes” and opposing “all efforts to defund the police.”

Still, Republicans see the issue as one that can motivate their conservative base as well as moderate, suburban independents who have shifted toward Democrats in recent weeks.

In the past two weeks alone, Republican candidates and groups have spent more than $21 million on ads about crime — more than on any other policy issue — targeting areas from exurban Raleigh, N.C., to Grand Rapids, Mich., according to data collected by AdImpact, a media tracking firm.

But those attacks are not going unanswered: Over the past two weeks, Democrats have spent a considerable amount — nearly $17 million — on ads on the issue, though the amount is less than half of what Democrats spent on ads about abortion rights over the same period.

The political arm of the center-left think tank Third Way, Shield PAC, is starting to spend about $5 million targeting swing voters to defend at least seven Democrats who are vulnerable on the issue of crime.

In 2020, some Democrats feared alienating liberal activists who were pushing to drastically overhaul policing. A series of defeats by progressive candidates in New York and California since the 2020 election delivered evidence of the depths of voter frustration about quality-of-life issues, prompting more in the party to embrace a moderate message. Some in the party see an opening to flip the script — or at least neutralize some of the attacks.

How Times reporters cover politics. We rely on our journalists to be independent observers. So while Times staff members may vote, they are not allowed to endorse or campaign for candidates or political causes. This includes participating in marches or rallies in support of a movement or giving money to, or raising money for, any political candidate or election cause.

A private memo circulated by the House Democratic campaign arm over the summer urged candidates in competitive races to rebut Republican criticisms by promoting endorsements from law enforcement and clearly articulating to voters that “Democrats stand for funding police to keep communities safe.”

Many candidates have adopted that approach. “Mandela Barnes doesn’t want to defund the police,” a retired officer identified as “Rick” says in a recent ad for the Democratic nominee for Senate in Wisconsin, pushing back on a weekslong onslaught. “He’s very supportive of law enforcement.”

After months of calls for legislative action from Democratic lawmakers facing difficult re-election races in conservative-leaning districts, House Democrats overcame divisions within their caucus to pass a package of legislation on Thursday awarding $60,000,000 annually for five years to local police departments. The centerpiece bill attracted support from a broad bipartisan majority but faces an uncertain future in the Senate. Still, Democrats say the House passage helps their case on crime and policing.

“We proved pretty clearly that we are very strong supporters of law enforcement funding — investing, not defunding — which is key to protecting our families and our communities,” said Representative Josh Gottheimer, Democrat of New Jersey and the sponsor of the legislation.

“You can’t be pro-law enforcement and pro-insurrection,” Mr. Biden said late last month in Wilkes-Barre, Pa. “You can’t be a party of law and order and call the people who attacked the police on Jan. 6 ‘patriots.’”

And an ad from the House Majority PAC, which is aligned with House Democratic leadership, accuses the Republican candidate in Arizona’s Fourth Congressional District of favoring “defunding the F.B.I.” and disrespecting federal law enforcement.

Still, despite the Democratic efforts, polling shows that voters tend to see Republicans as stronger on public safety. By a margin of 10 percentage points, voters nationwide said they agreed more with Republicans on crime and policing, according to the most recent New York Times/Siena College poll.

Republicans say that attacks based on a candidate’s record will resonate most. Greg Landsman, the Democrat running against Representative Steve Chabot, a Republican, in a Cincinnati district that was redrawn to lean Democratic, has faced criticism for writing legislation as a Cincinnati councilman to redirect $200,000 from the city’s Police Department to an independent board responsible for fielding complaints against police officers.

Some of the advertising has racial overtones. An ad against Mr. Barnes from the National Republican Senatorial Committee, which highlights the 2021 attack at a Christmas parade in Waukesha, Wis., ends with a picture of Mr. Barnes alongside three members of the progressive “Squad” — all women of color — and the words “different” and “dangerous.” His supporters called the ad racist.

Other ads are slightly misleading: In New York, the first general-election ad from the Republican candidate for governor, Representative Lee Zeldin, is a compilation of grainy footage of shootings, looting and fistfights. “Vote like your life depends on it,” a narrator urges. “It just might.”

Mr. Zeldin recently confirmed that half of the video in the ad was shot before Gov. Kathy Hochul took office, and that one clip was from Oakland, Calif.

And a Republican ad campaign against Wiley Nickel, a Democratic defense lawyer running in an exurban House district near Raleigh, N.C., accuses him of representing rapists, “cop killers” and distributors of child pornography.

Mr. Nickel’s campaign says he has never defended people accused of those kinds of charges; his campaign manager called the ad’s claims “patently false.” Mr. Nickel says his practice focuses on low-level offenses and misdemeanors. He has countered by proclaiming in his own ad that he would increase police funding.

As for the ad in New Mexico describing a break-in at Mr. Ronchetti’s home, the incident took place in 2012 — seven years before his opponent took office.

“Our point wasn’t that the governor was responsible for my particular home invasion,” Mr. Ronchetti said in an interview. “To me, this is purely an issue of, we are headed in the wrong direction.”

At least a few voters say they relate to the sentiment — if not the specifics — of that Republican message.

“I wouldn’t even let my kids play with guns,” said Alanna Gonzalez, a retiree in Issaquah, a Seattle suburb. “And now we’ve talked about getting one. We’ve had break-ins in our condo. There’s been shootings on the street. Never did we ever have anything like that before.”

Ms. Gonzalez, a lifelong Democrat, said that crime had changed her political views, and that she and her husband, Robert, were considering voting for Republicans this year.

Mr. Gonzalez said the Democratic Party had become “a hug-me, squeeze-me bunch, and we just don’t like it.”

A recruitment officer was wounded in the latest attack on a Russian draft office.