Fact-Checking a G.O.P. Attack Ad That Blames a Democrat for Inflation 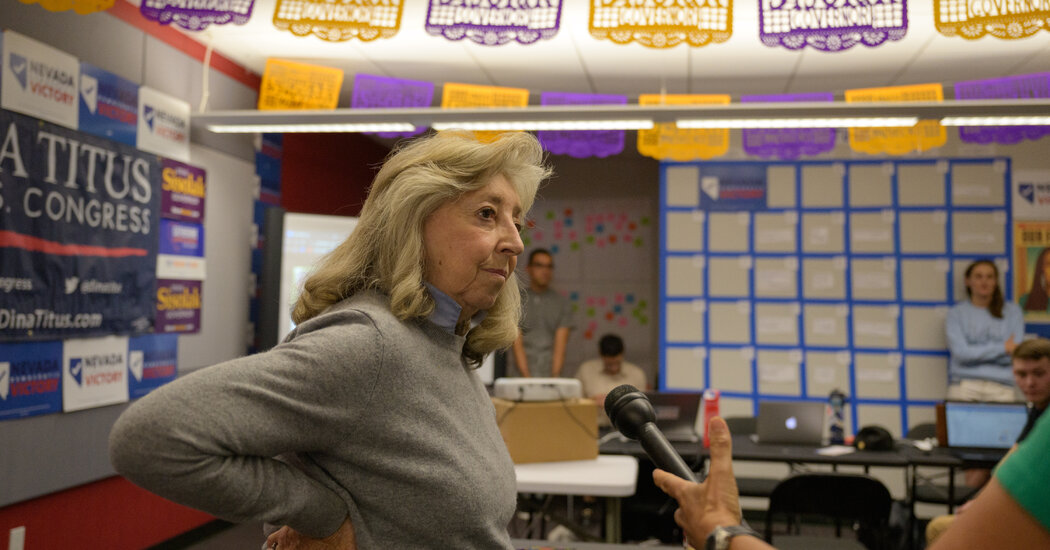 In a Nevada tossup race that could help decide whether Republicans gain control of the House, a super PAC aligned with congressional G.O.P. leaders recently mounted an economically driven attack against Representative Dina Titus.

In a 30-second ad released on Saturday, the Congressional Leadership Fund accused Ms. Titus, a Democrat who represents Las Vegas, of supporting runaway spending that has exacerbated inflation.

“Economists said excessive spending would lead to inflation, but she didn’t listen. Titus recklessly spent trillions of taxpayer dollars,” the ad’s narrator says, and, later: “Now we’re paying the price. Higher prices on everything. Economy in recession. Dina Titus. She spent big … and we got burned.”

This lacks context. The implication here is that Democrats’ policies led to inflation. We recently put this question to our economics correspondent, Ben Casselman, who said: “True, although we can argue all day about how much.”

He explains: “Here’s what I think we can say with confidence: Inflation soared last year, primarily for a bunch of pandemic-related reasons — snarled supply chains, shifts in consumer demand — but also at least in part because of all the stimulus money that we poured into the economy. Then, just when most forecasters expected inflation to start falling, it took off again because of the jump in oil prices tied to the war in Ukraine.

“Now, inflation is falling again. Overall consumer prices were up just 0.1 percent in August, and a separate measure showed prices falling in July. But a lot of that is because of the recent drop in gas prices, which we all know could reverse at any time. So-called core inflation, which sets aside volatile food and energy prices, actually accelerated in August.

“All of which means we don’t know how long the recent pause in inflation will last, and we definitely don’t know whether Biden will get credit for it if it does.”

Backing up a bit, it’s worth noting that not all of the stimulus spending was at the direction of President Biden and Democrats. The first two rounds were approved during the Trump administration. And, economists were not united in warning about inflation.

As for the economy being in recession? “Most economists still don’t think the United States meets the formal definition,” Mr. Casselman wrote in July, and he said that remained true as we head into October. But such calls are only made in retrospect. “Even if we are already in a recession, we might not know it — or, at least, might not have official confirmation of it — until next year,” Mr. Casselman said.

This is true. The Inflation Reduction Act contains a tax credit for electric vehicles. Their final assembly must be completed in North America to be eligible for the credit, which, indeed, extends to several luxury automakers. The list includes Audi, BMW, Lincoln and Mercedes, but also non-luxury models like the Ford Escape and Nissan Leaf. What about Tesla? It made the list of 2022 models, but it has already reached a federal cap of the number of vehicles eligible for the credit, according to the Energy Department.

“Even a billion dollars to prisoners, including the Boston Bomber.”

This is exaggerated. Dzhokhar Tsarnaev, who was convicted of helping carry out the 2013 Boston Marathon bombings, received a $1,400 Covid-19 stimulus rebate from the federal government in June 2021. The money was part of the American Rescue Plan Act, which President Biden signed into law after it passed the House on a mostly party-line vote, with Ms. Titus supporting it.

But what the Republican attack ad failed to disclose was that Mr. Tsarnaev was required by a federal judge to return the money as part of restitution payments to his victims. Another glaring omission was the fact that inmates were previously eligible for Covid-19 relief payments when former President Donald J. Trump was in office, though the Internal Revenue Service and some Republicans had later tried to rescind the payments. A federal judge thwarted those efforts, ruling that inmates could keep the payments.

Those nuances haven’t stopped Republicans from latching onto the issue of inmates receiving Covid-19 payments against Democrats in key races across the nation, including Senator Raphael Warnock of Georgia and Senator Mark Kelly of Arizona.

In a World of Chaos, Fed Officials Are Still Hoping for a Soft Landing