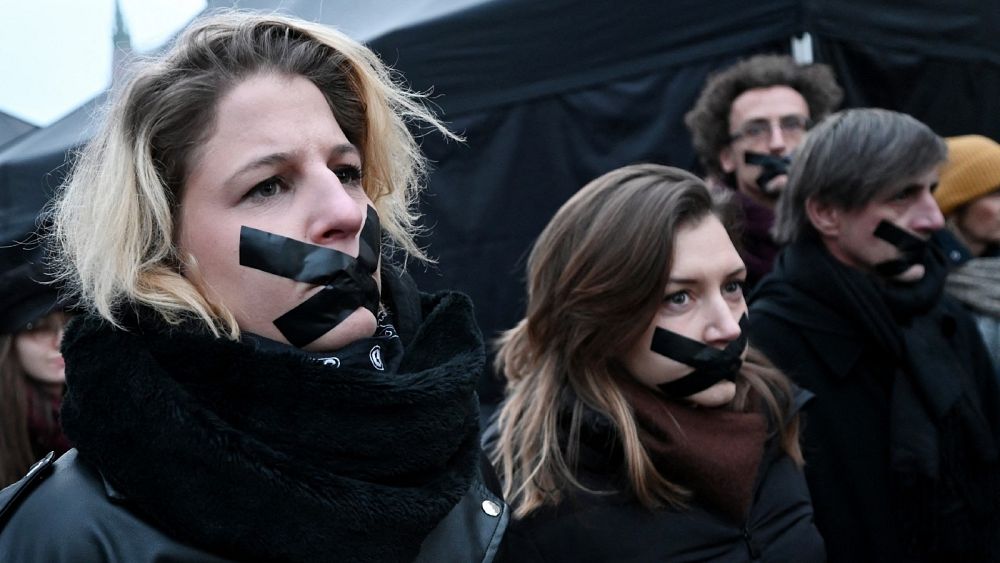 “I just don’t understand why the government treats us like criminals,” teacher Maria Nemes told Euronews. “I love my students. I love my colleagues. I love my high school.”

Nemes is one of hundreds of Hungarian teachers who have been sacked for striking.

The 50-year-old English teacher was dismissed with “immediate effect” in November, after protesting the decision of local authorities to fire some fellow teachers for “civil disobedience”.

Anger among teachers has bubbled away for years over low wages and gruelling working hours, but new strike laws have pushed them into open conflict with the government. Budapest vowed to give teachers a pay rise in the next three years last month.

Industrial action has swept through the sector, triggering rafts of dismissals and large protests that have taken on an anti-government flavour.

In December, Karinthy Frigyes High School in Budapest was forced to close because so many teachers were sacked or absent, their number was below the legal minimum.

Meanwhile, an “extraordinary break” was ordered at Vörösmarty Mihály Secondary School after 90% of the teaching staff refused to return to work following the dismissal of a colleague.

What is happening to teachers in Hungary?

Even before the cost of living crisis, Hungarian teachers felt underpaid, earning approximately €520-560 per month after more than a decade on the job. In comparison, the average price of an apartment in Budapest is €400-600.

Inflation in Hungary is currently 22.5%, which is among the highest in the EU.

In January, one junior teacher wrote a damning open letter to Hungarian Prime Minister Viktor Orban. Despite working 57 hours a week, he was left with €98 to live on a month after paying rent and bills, eating only rice or pasta and often having to bring toilet paper home from his school.

“If you’re a young teacher who lives on their own, there is simply no way of making it until the end of the month,” said Andras Kadar, an attorney and co-chair of the Hungarian Helsinki Committee, which is legally representing two Hungarian teachers’ trade unions.

“We are talking about people to whom we trust our children’s upbringing and education. It’s obviously crazy that we don’t pay them enough.”

Low wages and poor working conditions have undermined the quality of education in Hungary, fuelling crippling teacher shortages as more and more people are pushed away from the profession, claimed Nemes.

She believed the government was purposefully doing this as a way of stabilising its power and ensuring people do not challenge it in the future.

“I feel as if our government does not want people to think critically,” Nemes told Euronews.”They don’t want people to have an academic education or open mind, nothing, just go to work, do your job and vote like you are told.

In October. Hungary’s government pledged to give teachers an unprecedented wage hike in the coming years, but claimed it cannot do so until the EU releases blocked funds.

Last month, Gergely Gulyás, the head of the Hungarian Prime Minister’s Office, said if “there are no obstacles to the arrival of the money [from the European Commission] then the salary increases will begin in January.

Budapest and Brussels are currently in a long-running spat over rule of law concerns and the alleged misuse of EU money in Hungary.

Brussels has blocked much-needed funding from Budapest until it passes reforms.

‘Strikes were made invisible’

Things were made worse for teachers in Hungary when the government introduced a decree in 2021, which increased the “minimum level of service” strikers must provide during a walkout.

In reality, this change decreased the effectiveness of strikes as it forced teachers to still do a large amount of work while striking.

It was passed using special emergency powers brought in under the COVID pandemic, though the decree was reformed into a new law in July 2022.

“This decree made strikes invisible,” Kadar told Euronews. “A strike can only perform its function if it hurts to some extent. A strike that does not hurt is not a strike.”

He pointed out that industrial action is protected under the European Convention on Human Rights under the freedom of assembly.

“Strikes are a way for workers to assert their interests vis-a-vis a more powerful actor,” said Kadar. In the world of labour, there are asymmetries of power. The employer has the money to pay you and the power to dismiss you. If an employer exploits you, you need lawful ways to pressure them to improve your working conditions.

“This is exactly what the teachers are trying to do”.

Denied the legal right to strike, teachers were left with only one tool left to protest: so-called “civil disobedience”.

But this meant that their action was not considered a lawful strike, but rather a refusal to work, which forms grounds for dismissal under Hungarian employment law.

Together with the Helsinki Committee and the Hungarian Civil Liberties Union, their two unions appealed to the country’s constitutional court and later the European Court of Human Rights (ECHR).

Kadar, who is working on the case as a joint effort of the Hungarian Helsinki Committee and Hungarian Civil Liberties Union, hoped the ECHR would rule in the teacher’s favour to give them a stronger case for repelling the “strike-breaking” law.

“The government at the moment is in dire need to prove its commitment to fundamental democratic values and rule of law,” he said. “I can only hope that they take this seriously”.

The case at the ECHR is still ongoing.

According to Dr Judit Zeller from the Hungarian Civil Liberties Union, teachers saw “no other way” of influencing the authorities into taking action.

“There’s no impetus from the government to develop the sector. These are problems that have existed for decades. And we just don’t see a way out.”

“Policies are just not appearing. There’s no consideration to have an education reform.”

The Hungarian government has brought in a number of educational reforms over the years. It has created scholarships for disadvantaged students, swimming programmes and supported the public education of local ethnic minorities.

But Hungary’s teachers are not resisting alone.

Thousands of pupils and parents have protested in solidarity with them, especially in Budapest and other major cities, with the largest demonstration drawing in crowds of over 50,000 in October.

Some demonstrations have taken on a more anti-government stance, with protests displaying banners ridiculing the Hungarian PM.

“There is already a movement and you can feel that it is getting wider and wider … the solidarity overarches the political divide,” said Dr Zeller. “Religious schools and those on the right side of the political palette are also supporting teachers.”

Teachers have called for “urgently needed” reforms, besides higher wages, reduced workloads and the restoration of their right to strike.

They want a renewal of education, with more opportunities for everyone, an improved, freer service and a 21st-century environment that has a modern curriculum, according to Dr Zeller.

Plus she claims teachers also want the government to change how it treats teachers, putting an end to what she saw as discrediting tactics and intimidation.

In 2011, the Hungarian government put schools directly under its executive control and took away many of the freedoms of teachers, such as their right to choose textbooks, replacing them with books that some claim are extremely low quality.

“Even if we look at the strike demands, it’s not enough,” added Dr Zeller. “If they [teachers] get 100%, it’s still not going to be enough for our educational system”.

“It has to be reformed from the ground.”

Hungary’s Interior Ministry had not responded to Euronews’ requests to comment on this article at the time of publication.

A strong support network is critical after being released from detention, an expert says.