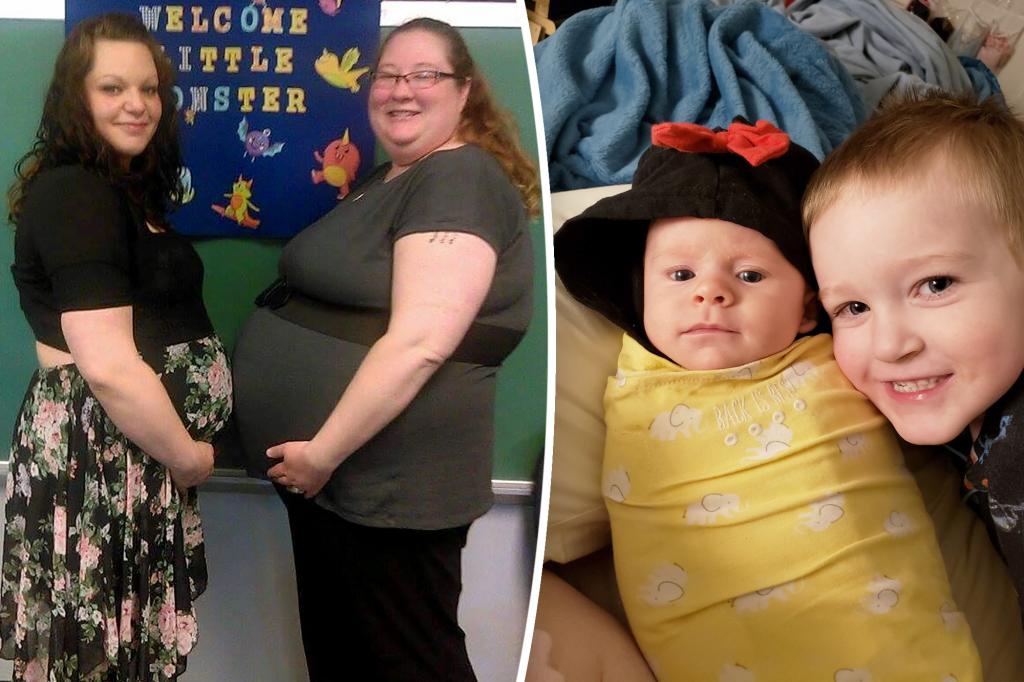 A woman’s best friend has gone above and beyond — donating her eggs and carrying her bestie’s baby when she couldn’t.

Alicia Ward, 34, and her husband Austin, 33, were desperate for a second child after welcoming their first son, Declan, six years ago.

However, the mom of one struggled to become pregnant again — inspiring her best friend Danielle Blair, 28, to step in with an amazing offer: She volunteered to carry their child for them as a surrogate.

“She phoned me and said: ‘Let me have your baby for you,’ ” Ward, who lives in Ohio, recalled in an interview with South West News Service, admitting that, at first, she “didn’t think she was serious.”

“But a few weeks later she called me again, and said, ‘I’m serious about this. If you want to, let’s do it,’ ” Ward continued. “I was shocked someone was willing to do such an amazing thing for us.”

Blair, from Pittsburgh, Pennsylvania, was a “traditional surrogate” — meaning her egg was fertilized with the sperm of the intended father, which Ward admitted she struggled with at first.

“I was really nervous,” Ward said. “This child was only going to be a half-sibling to my son and might not look like him.”

“But I was extremely thankful for Danielle,” she reiterated.

Blair — who has two children of her own — got pregnant in January 2019 via intrauterine insemination and found out later she would be having a little girl.

She surprised her best friend with the news.

“[Blair] came to visit and handed me this egg that she had wrapped up and inside was a note asking my son to get a bag from the hall,” Ward recalled. “He opened the bag and inside was a little pink outfit. I was so excited, I was going to have a little girl.”

“I was worried about bonding with Maisie and worried that she would miss Danielle,” the loving mom admitted. “But when I first held her that all washed away.”

Ward said she felt the connection “instantly” when she held Maisie. “Now she’s a mommy’s girl, she definitely prefers me over her dad,” she quipped.

The parents say they’re going to tell Maisie about how she was brought into the world as soon as she’s old enough.

“She is no different, just because she doesn’t have my DNA,” Ward said, with her husband agreeing, saying her birth “never felt any different” than their son’s.

“She was ours from the start,” he said.

“Danielle is always going to be in her life, and I am so thankful that she could give us the second child we always wanted,” the happy mom added.

Ward said the incredibly selfless act has brought the friends — who have been inseparable since meeting on a ‘May 2016 due date’ Facebook page in 2016 — so much closer.

“We can’t thank her enough for making our dreams come true,” she gushed. “It was definitely a roller coaster of emotions, but once they are in your arms, it is all worth it.”

Dear Abby: I get called ‘dirty names’ for not wanting to birth kids