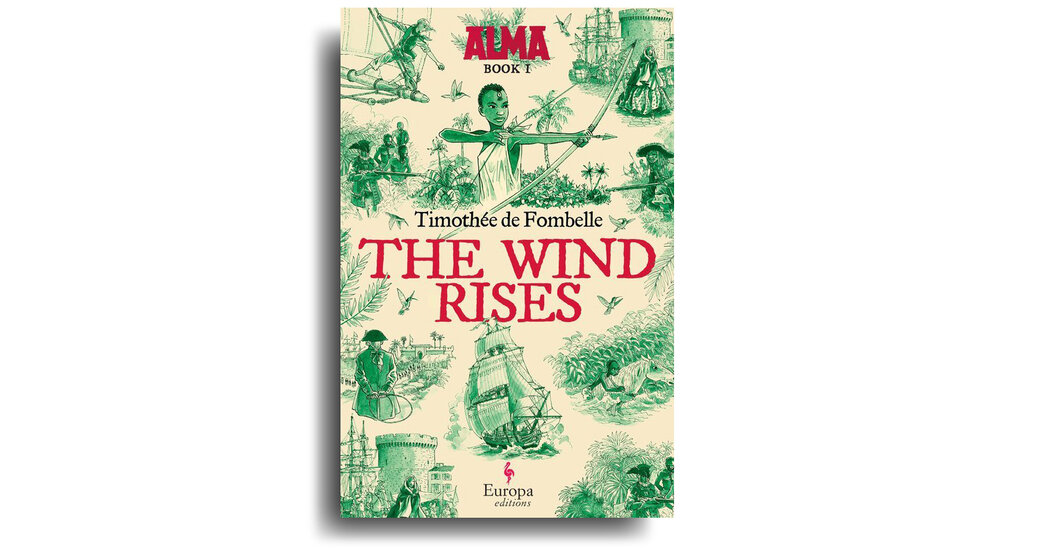 Alma lives with her family in a secluded valley in West Africa. She has never known the world outside; her parents won’t say what drove them into their private Eden. One day a horse (“a zebra with no stripes”) wanders into the valley, and a larger world beckons. Alma’s little brother, Lam, ignorant of danger, sets out to see what lies beyond the hills. Alma follows, discovering the story of her small family even as she confronts the awful truth of a countryside riven by the 18th-century slave trade.

Meanwhile, Joseph Mars, a 13½-year-old French boy who sneaks onto a merchant ship bound for Africa, tackles the challenges that tend to afflict 13½-year-old white boys in nautical adventure novels: He’s an orphan, of course, plus there’s an evil ship-captain, a treasure map, a riddle, pirates and a high demand for acrobatics on ropes. Some 300 pages in, Joseph’s plotline does take a surprising turn, but still, “X” marks the spot.

Timothée de Fombelle’s “The Wind Rises” slowly charts the course that will bring these two characters together. The story is told through the eyes of Alma, Joseph and a host of supporting players: an idealistic young sailor, a Fante slave-hunter, a princess of the city-state of Bussa, a headstrong merchant’s daughter and a wily accountant. Unfortunately, not all these threads are equally engaging. The swashbuckling tropes in Joseph’s tale seem overly familiar, even trivial, next to the urgency of Alma’s quest amid the harsh realities of the African diaspora.

De Fombelle’s deep research into the period brings welcome color to the mechanics of the adventure plot. A disgraced doctor on the ship is “assigned all the toughest jobs, such as coating the leaking floors with sheep’s grease and filling the emptied barrels with seawater to keep the weight of the ship the same.” Vivid and exact. An indignant captain looks like “he’d just been asked if he danced the rigadoon or played the hurdy-gurdy.” Delightfully precise. And though plucky orphans are standard fare, there’s an interesting hook to the boy’s moniker: “If your name is Joseph Mars, you must have arrived at the orphanage on the 19th of March, St. Joseph’s day. They take the name of the saint on the calendar hanging on the wall of the entrance hall as a first name and the month of the year in French as a last name.”

The attention to period detail is not incidental, given the explosive nature of the subject matter: the African slave trade and the Middle Passage to the French colonies. To some extent, the routine features of the adventure are in tension with the particular sorrows of the kidnapped. As Alma scolds Joseph: “You see the pain at the bottom of this ship as though it were one big animal caught in a trap. But there are hundreds of different kinds of pain.” De Fombelle recognizes many of these agonies, and his succinct and devastating explanations of the customs of the slave trade powerfully animate the facts. This is a book about heroism, however, not suffering. Depending on your predisposition, you will either find a quasi-magical African family and a lost valley to be a necessary counterbalance to the account-book rationality of the colonizing West or you will roll your eyes. By the end, Alma and her family have almost been reunited through several excruciating near misses but instead find themselves sailing farther apart toward distant destinations and a second volume.

M.T. Anderson, a National Book Award winner, is the author, most recently, of “The Daughters of Ys.”

Officials Hopeful That Monkeypox Can Be Eliminated in the U.S.