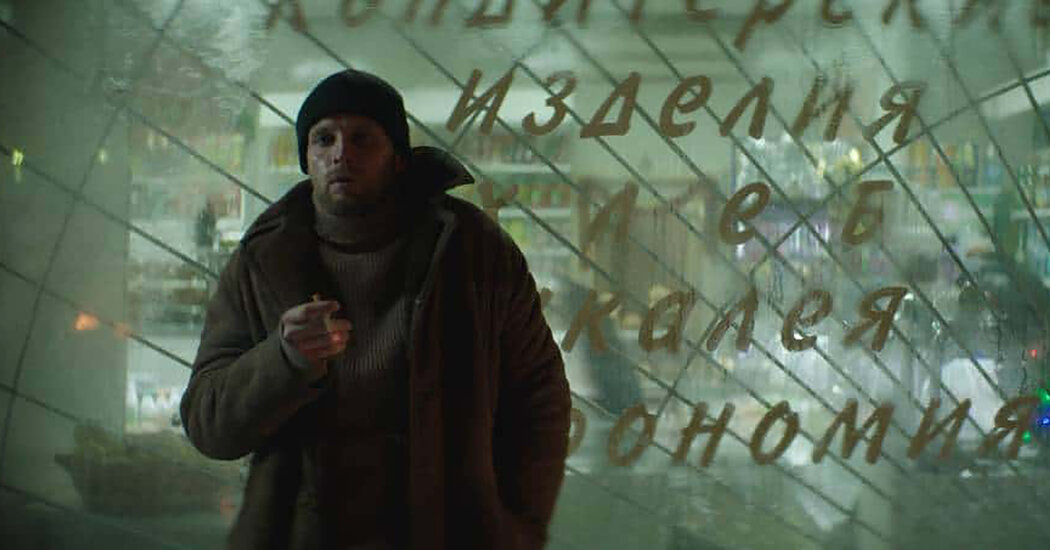 When the phantasmagoric “Petrov’s Flu” opens on a crowded bus — a nightmare of jostling, babbling bodies — it seems obvious that there’s more troubling its hero than a typical seasonal malady. Sweaty and unsteady, he navigates through the other surging, grumbling passengers. Then a man yanks him off the bus, someone hands him a gun and Petrov is suddenly in a firing squad mowing down prisoners — and then he gets back on the bus and rejoins the clamorous horde he never wholly escapes. Welcome to Russia!

For the next two and a half hours in this droll, chaotic, fitfully dazzling movie (it was at the 2021 Cannes Film Festival), Petrov (Semyon Serzin) continues to sweat and stagger as he roams a derelict urban landscape. Feverish and often plastered, he is in bad shape, and so is his world, with its ominous faces, soupy gloom and rowdy human comedy. His reason for rambling isn’t obvious. But as he wanders, he keeps slipping into outlandish reveries amid meeting friends, drinking and drinking some more. It’s unclear at first whether he’s seeking to escape reality or whether it is eluding him.

Much of what happens in “Petrov’s Flu” is intentionally and enjoyably destabilizing. It takes place over a fairly compressed period of a day or two (maybe!), but includes several long flashbacks that expand the overall time frame by decades. And while the story is relatively straightforward — Petrov travels through a strange, at times hellish realm, evoking Odysseus and Leopold Bloom in their respective underworlds — the filmmaking is richly imaginative and unbound by the usual time-and-space constraints. When Petrov enters one location, he sometimes exits someplace entirely different.

In recent years, the director Kirill Serebrennikov has been best known abroad for his difficulties with the Russian government. In 2017, he was placed under house arrest, accused of embezzling around $2 million. The charges have been seen as retaliation from the Kremlin for both Serebrennikov’s work and his expressed views on, among other issues, Russian censorship, the country’s aggression abroad and its persecution of lesbian, gay, bisexual, and transgender people. He was put on trial and sentenced, but in March, after the remaining sentence was suspended, Serebrennikov fled to Germany, where he remains.

It’s hard not to take this history into account while watching “Petrov’s Flu,” which paints a bleak, wistful, tragically funny portrait of a man, a people, a world. Yet despite the grimness, the violence and the grotesque bleating of some hateful, prejudiced trolls, the movie never drags you down (though it might exhaust you) because it’s buoyed by Serebrennikov’s bravura, unfettered filmmaking. As the gorgeously restless camera travels alongside Petrov — as walls disappear and locations melt into one another — it starts to feel like both the character and director are trying to imagine a way out.

As Petrov dreams and boozes and meanders, a sketchy portrait of him emerges. He has a family, though it’s complicated. He says he’s divorced but refers to his ex, Petrova (Chulpan Khamatova), as his wife. Like Petrov, she too experiences lurid, vicious fantasies. The pair have a young son, and all three seem to live in the apartment where Petrov draws comics. He and Petrova also sleep together, having sex that turns uneasily aggressive and, at one point, inspires Petrov to get out of bed and draw. Some of the comic panels he’s working on seem to mirror what happens onscreen.

Part of what gives the movie its tension and kick is that it’s not always clear how much of what transpires is happening in Petrova’s and Petrov’s heads. The movie is based on the Russian novel “The Petrovs In and Around the Flu,” by Alexey Salnikov. Despite the English-language title, the movie regularly shifts from Petrov to Petrova, who also experiences hallucinations. These take place during fraught, frustrating encounters with other people. She pauses, as if possessed, her eyes briefly blacken, and she wreaks terrible violence: She pummels one man’s face and slits another person’s throat.

Whether these dark thoughts originate in Petrov or Petrova seems beside the point. What matters is that these frenzied visions recurrently engulf the characters — and the movie — transporting them from their everyday brutish reality into an equally brutish fantasy world. Asleep or not, they are dreaming, but their dreams are nightmares that are, by turns, inventive and liberating, grotesque and suffocating. At least Petrov flashes back to his relatively pacific childhood, a period of light and tenderness, a time before Russia’s current regime. And of course Petrov is an artist, which I imagine is finally his salvation as much as it is for the wildly talented Serebrennikov.

Petrov’s Flu
Not rated. In Russia and English, with subtitles. Running time: 2 hours 25 minutes. In theaters.