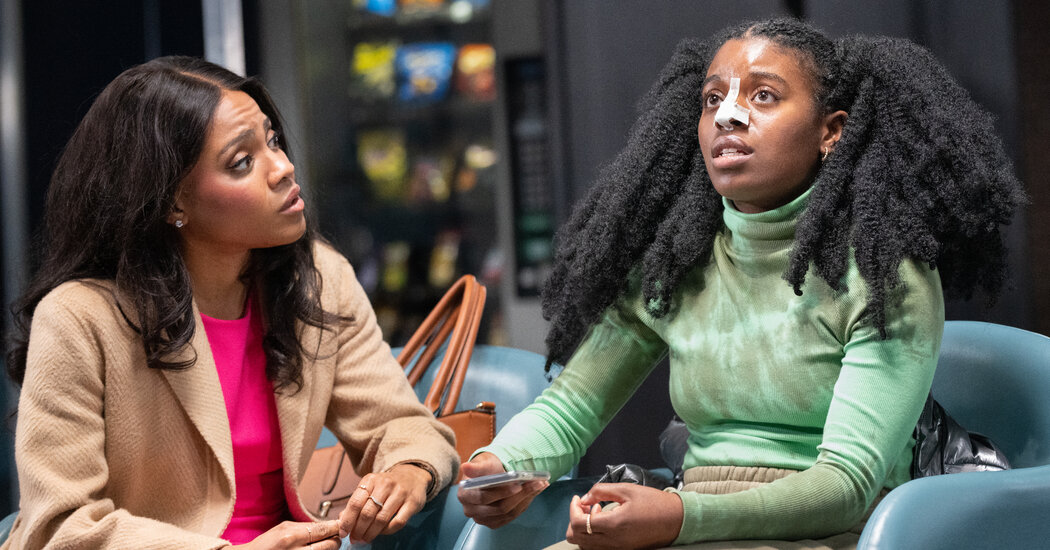 With another pandemic winter on the horizon, it’s hard not to imagine all of the ways our physical health determines the shape and quality of our lives and reveals the most intimate facets of ourselves.

That’s what I suspect the playwright Gracie Gardner (“Athena”), who is also an E.M.T., was aiming to get at in her new play, “I’m Revolting,” which opened Wednesday night at the Linda Gross Theater. But despite the show’s attempts to tell a moving story about illness, the body and the U.S. health care system, this Atlantic Theater Company production fails to make a compelling work of theater out of the issues facing patients in the waiting room of a skin cancer clinic.

Bookmarked by conversations between two doctors, Jonathan (Bartley Booz, with the same bumbling brand of comedy he perfected as the wacky butler in “The Play That Goes Wrong”) and the veteran Denise (a mechanical Patrice Johnson Chevannes), “I’m Revolting” initially seems to be a play about the struggles of doctors and health care workers. Then it seems as if it will be a play about physical and emotional health, but it veers off course, and never works its way to a clear statement.

In the impersonal space of a waiting room are seven blue chairs lined up neatly in a row, a water cooler, a vending machine, some fake plants, and a table with a bottle of hand sanitizer on it (set design by Marsha Ginsberg). The doctors discuss the day’s patients, identifying them by their maladies, their race and gender, their medical history.

They mostly talk among their groups — Anna tells Reggie to assert her rights as a patient, Liane and Jordan discuss the merits of a particular lotion — and occasionally to one another. Paula’s suggestion that meditation and positive thinking is all the cure her son needs leads to a waiting room debate about science and alternative medicine.

And yet there’s little to no depth to these patients, or anything novel in their conversations, which occur while they wait to be called on by Jonathan and Denise. It soon becomes clear that the thin plot is in desperate need of a raison d’être.

The direction, by Knud Adams (“English”), is unremarkable; the actors not only lack chemistry but also deliver stiff readings of their lines. And for a play about the Big C, there’s no sense of urgency or threat. Even with a spare 90-minute running time, and the occasional laughs Beans, Booz and Gerety generate through their characters’ particular quirks and expressions, “I’m Revolting” drags like the hours in waiting room limbo.

In those moments when the script rolls out some visceral details (describing the repurposing of a flap of forehead skin, or the archaeological dig into an eye socket), it feels like an empty attempt to have the audience squirm.

During the play, I kept thinking of my neighbor who recently told me about his own battle with skin cancer. His story wasn’t just about the skin on his nose but his path to the malady — from a childhood running in the sun and several years working under the cloudless sky in the Caribbean — and his ongoing recovery.

We are more than our afflictions, and the story of our nation’s medical care over the past few years warrants more than a few drive-by conversations in a waiting room. As it is, “I’m Revolting” only skims the surface when what it really needs is to perform a thorough examination.

Biden, in Florida, pledges to help residents ‘fully, thoroughly recover’ from the hurricane.