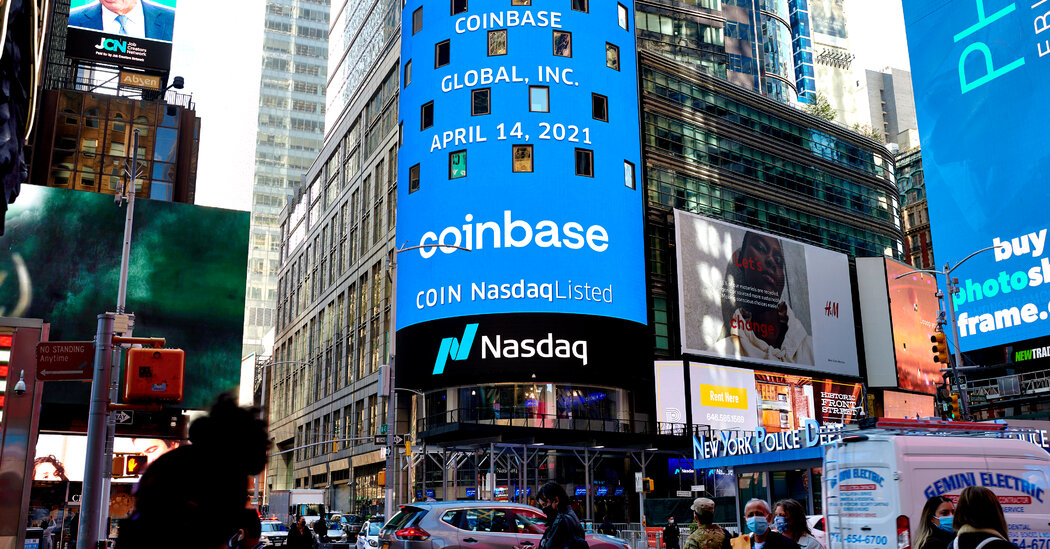 Coinbase, the largest cryptocurrency exchange in the United States, reported a 63 percent decline in revenue on Tuesday, as it weathers a broader downturn in the crypto market.

The company said revenue for the second quarter was $808 million, down from $2.2 billion a year earlier. Its number of monthly customers rose to nine million from 8.8 million last year, but it was down from 9.2 million the previous quarter. Coinbase also swung to a net loss of $1.1 billion, compared with profits of $1.6 billion a year ago.

It was the second quarter in a row that Coinbase has seen declines in revenue and users compared with the prior quarter.

The results emphasized the stark challenges facing Coinbase at a turbulent moment for the crypto industry. The prices of the leading cryptocurrencies crashed in May and June as a series of experimental crypto ventures collapsed, plunging investors into financial ruin. The crash has led to layoffs and cost cutting across the industry, dampening the excitement that surged last fall when the price of Bitcoin reached a record high.

As part of the industry meltdown, Coinbase’s stock price has fallen about 75 percent since November. The company’s success is largely tied to the fluctuations of the broader crypto market. In the first quarter, about 90 percent of its revenue came from trading fees it charged customers to buy and sell cryptocurrencies like Bitcoin and Ether.

In June, Coinbase laid off 18 percent of its staff, or about 1,100 employees. Brian Armstrong, the chief executive, said the company had “over-hired.”

Coinbase’s recent struggles have fueled concerns that it may be squandering its early lead in the industry, as competitors like Binance and FTX continue to expand during the downturn.

Despite its early start, Coinbase has never had a strong foothold in the international market, and it recently botched an expansion effort in India. Its most hyped product launch of the year — a marketplace for the digital collectibles known as nonfungible tokens, or NFTs — is widely considered a misfire. A hiring spree last year led to overspending and bloat.

The company has also come under regulatory scrutiny. Last month, the Justice Department filed insider-trading charges against a former Coinbase employee. In a related action, the Securities and Exchange Commission said that it considered some of the digital coins traded on Coinbase’s exchange to be securities and, therefore, subject to regulation like stocks or bonds — a stance the company has objected to.

Coinbase’s competitors appear to be faring better. FTX, another crypto exchange, has seen financial results that are “ballpark similar” to last year, according to its chief executive, Sam Bankman-Fried. Binance, the world’s largest exchange, announced in June that it was looking to fill 2,000 positions.

Still, Coinbase remains one of the most trusted and recognized crypto brands in the United States, known for its memorable Super Bowl commercial featuring a bouncing QR code. Last week, the company announced a partnership with BlackRock, the world’s largest asset manager, to help institutional investors trade Bitcoin.

When can we expect primary election results in Wisconsin and elsewhere?

About 200 Newspapers Owned by Alden Will Stop Endorsing Candidates

What Does X Mean to Elon Musk?

At the Edge of a Cliff, Some Colleges Are Teaming Up to Survive